An Interview with Simeon Rideb of Open Forum

We sat down with Simeon Rideb, creator of Open Forum, to talk about their experience curating a fashion collection and art performance with other Richmond artists earlier this year.

When did you decide to start working on this collection?

Last August I visited New York for the first time and while I was there, so many people around me were all doing these really crazy things. And I just remember thinking to myself that I don’t have anything to really show for my talents, I’m just always interested in doing things in the future. So on the bus ride back home I thought, Okay, I’m going to do something. Then I just started DMing all these people whose art I really liked, and all these people I was really interested in working with, and just began to come up with the idea of what I wanted to do.

How did you come up with the name Open Forum?

Oh that’s funny. I just knew that I didn’t want to name it after myself because i wanted something kind of hollow, something that just stood on its own, as opposed to something that had my name in it and the mystery that comes with that. When I was trying to think of good names I came up with Open Forum because it was a collaborative space. By sourcing real artists and giving them creative control to work within, it felt like an open forum for people to make their own stuff. 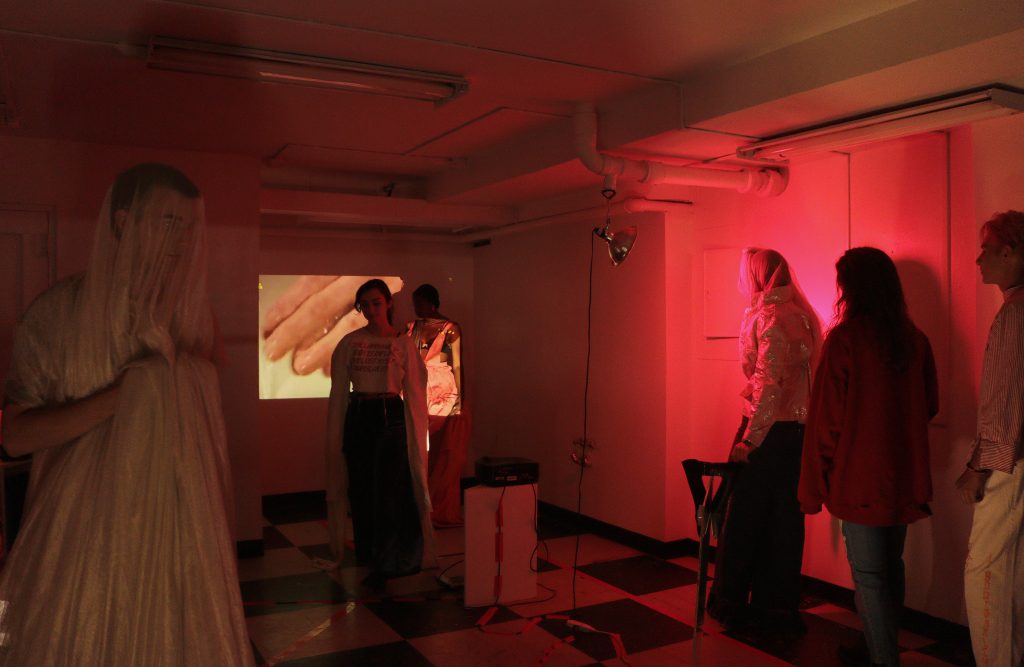 Did you have a strong idea for the aesthetic from the beginning or did it morph into something completely different?

I had a general feeling– like I knew exactly what I wanted my collection to look like and I knew the overall feel of the clothing, the music, the show. But then as I started working on it, it became way more conceptual than I had previously thought. I ended up really building the collection around that and then carrying that conceptual aspect through with how the graphics were printed, the way that I wanted people to photograph it, and the way that it was all presented. It ended up really refining its own self along the way.

What influenced your designs, i.e. other designers, any icons, streetwear, etc.?

A lot of design elements were influenced by Balenciaga. The designer who creates for them does a lot of work in response to preconceived perceptions of everyday objects. He would take a button up– something that we already wear and are familiar with, and then distort it in a really ugly way. That ability is something that I think is really strong and something that I was always searching for. In terms of the clothing inspiration, it is a lot about identity, so I wanted to communicate that by making everything really distorted. The sleeves are very long, there’s a lot of scrunches and ugly, awkward bunches to symbolize elements that we sort of see in ourselves– like just looking at yourself and not really understanding what’s going on or how you are feeling– that contributed a lot to the look and inspiration of the clothing.

Also, a lot of it is me taking very feminine and masculine pieces and contrasting them. There’s a lot of menswear t-shirts and pants– a lot of utilitarian clothing that is always really coded in maleness but then given ruffles and and making them very feminine version of themselves. There’s a piece that’s made of a bunch of aprons and a pink apron dress that ties in the back. Those two pieces take the concept of labor and how that ties into femininity. So, yeah a lot of it has to do with identity and how clothing coats your body when you’re wearing it. 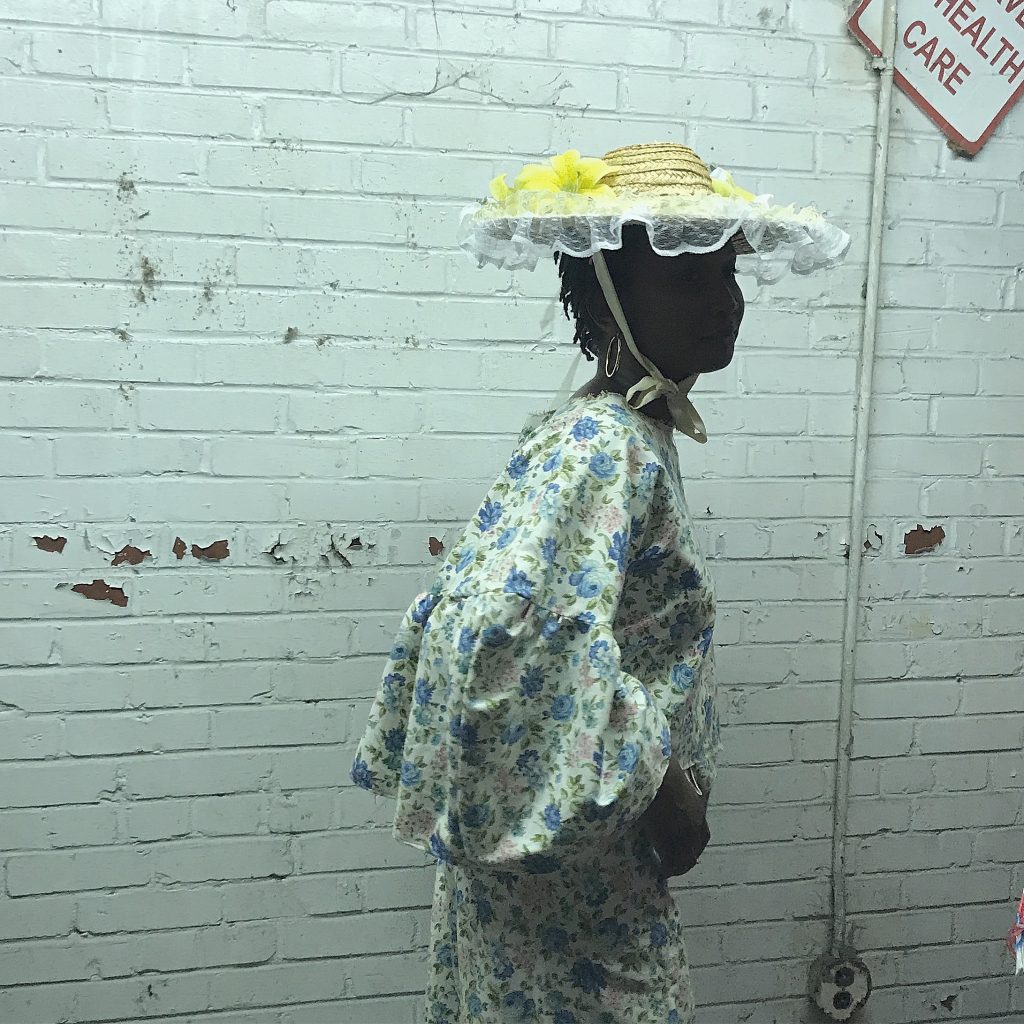 What is your design process as well as your construction process?

I’m a very visual person, so it was a lot less about patterning. I took one sewing class and it’s been about eight months since then. That’s why a lot of the clothes aren’t traditionally well made- there’s no lining and stuff like that that I would like to have in it. The process was a lot of taking fabrics that I got from a donation bin– I wanted to make sure that everything was very sustainable. I do think there’s only two pieces in the collection that incorporate denim that I bought. Everything else has been reused because I wanted to make that a priority. It was also a lot of draping and just figuring it out thinking, I don’t know how to make this but I know what I want it to look like. So I would just start to pin and sew and repin. Eventually I learned a lot more about sewing through that and ended up being able to do techniques like gathers and giant ruffles. So it was very much a visual, DIY, “let’s see how this works” process.

Were there any complications or issues at any point in the process?

Oh lots. Almost every single part of it. Because I wasn’t very experienced with sewing there was a lot of just having to tear apart a lot of the clothes and I had certain pieces not fit. The actual planning of everything was really hard because I was working with a ton of people and coordinating a lot of the models and their schedules. Everyone was really supportive and super involved, though, because I think that by giving somebody the chance to do work for themselves that they’re proud of, everyone ends up coming through in a very strong way. That’s a really big part of why it came out as well as it did. 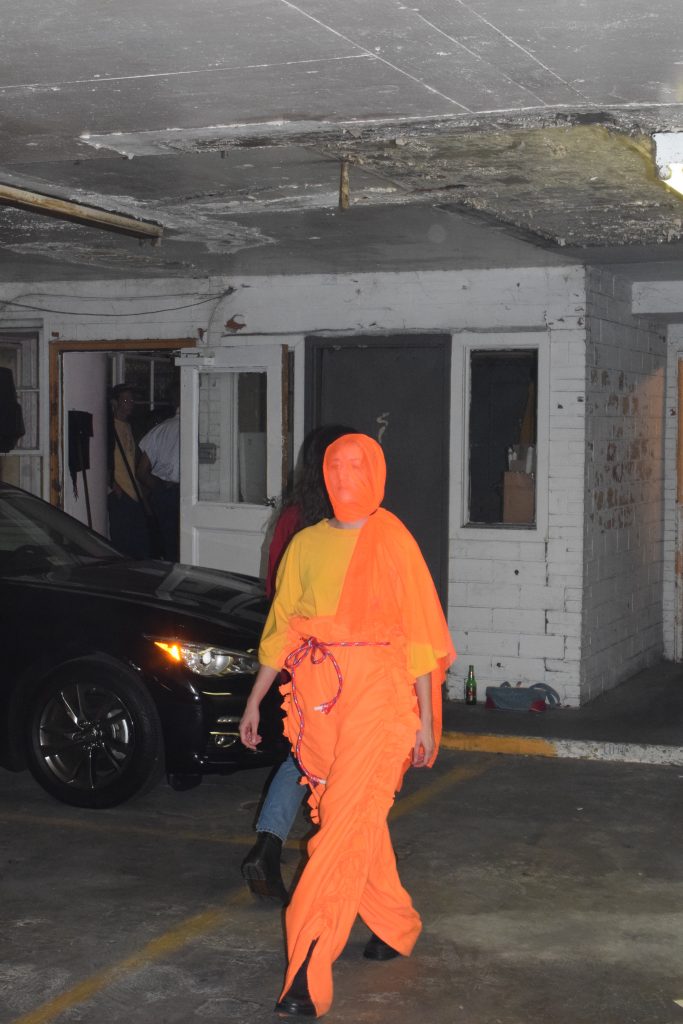 I think being there, too, you got to see firsthand how close-knit the community here is. Everyone knows each other, and it feels more like people are supporting each other as opposed to competing, would you agree?

Yeah exactly, and I really did appreciate that aspect of it.

That was one of my favorite parts about going- seeing everyone there supporting you and the other contributors.

Same, I think the best part for me was watching the reactions of all the other artists I worked with when they saw their work in that kind of setting, and actually saw something that we’ve been talking about for a year as a finished product.

Because you gave each other a platform.

And that’s what it was all about. I had a few people come up to me and say “Your show…” when it really was our show. That was the whole point of this, that it was an open forum. It was just as much yours as it was mine. 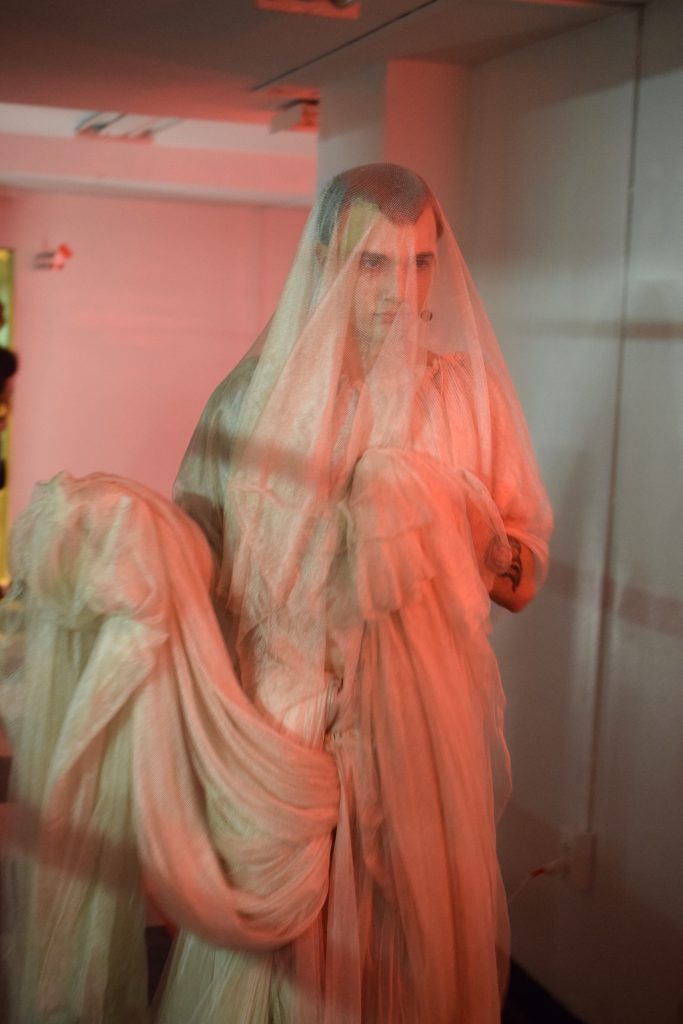 So you have the clothes made/the idea for a line. How did you begin to put together the show itself? How did you find the venue, models, etc.?

The venue was really important because I needed to be able to work with a space that fit the look that I was going for. I wanted something really industrial, because a lot of the clothing was really feminine so I wanted to contrast that with something that was dirty and very hollow.

It is also a lot about emotional intimacy so everything that I chose and did for it was also really linked to that. I wanted a space where it was like, “We’re coming together in an emotional moment where we’re all experiencing this clothing, reading all the text, feeling all of these things.” I felt it was really representative of like trying to do something intimate but not being comfortable with doing that– so the space was really perfect.

And also that gallery space, even though it was really small, I was really happy with it because I wanted the space to challenge everyone that was in it. So when people were watching the show, they had to press up against the wall and be very aware of the space and how they were navigating it. I had people come up to me and say “I felt like I shouldn’t have been there” but that was the whole point. I wanted to get people to feel uncomfortable. 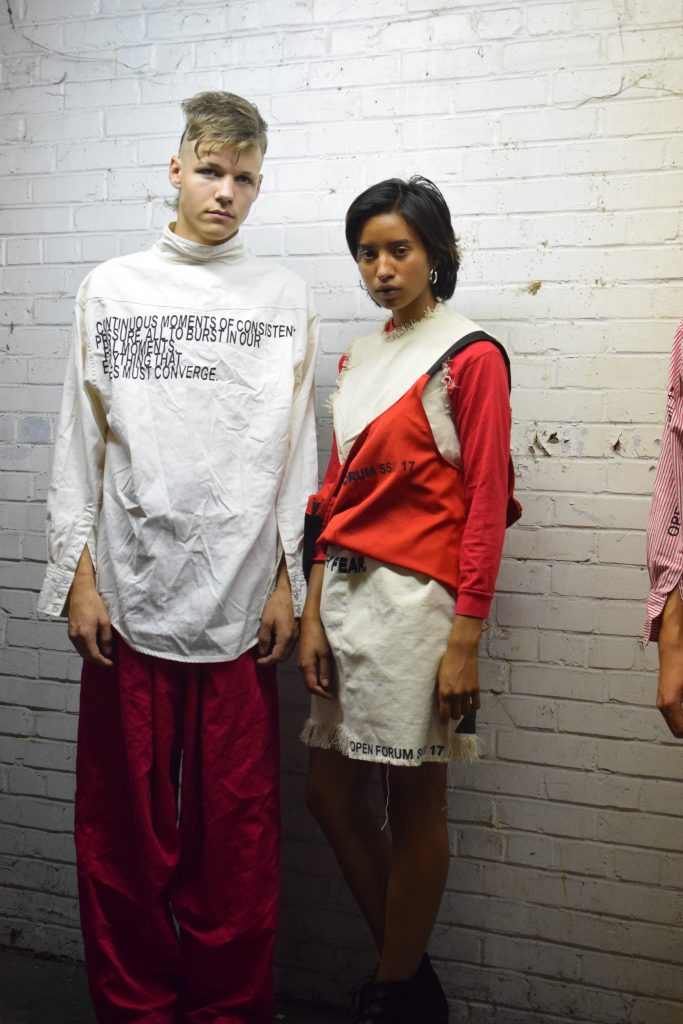 Yeah it felt like all your senses were heightened and you almost had to be hyperaware of the space you were taking up.

Which I thought was really interesting because the second you walked through the threshold the air changed.

Oh good! See that’s what we were all talking about when we were planning the installation of the setspace. I said it needs to be simple and almost chaotic so that it really reflects the video piece that Katie did and it would be even more intensified by the music that Thomas and I curated. And really trying to keep all of those elements consistent so that you really feel that mood throughout.

In terms of the models, I wanted to pick people that I knew preferably so that I really drove home that concept of an open forum- collaborating with people that you love and that you want to have in your space. I also wanted to focus on making it really diverse in terms of gender identity and color- I really wanted it to be very mixed.

Another one of my favorite parts was right before the show started. We were all waiting in a parking garage, and people who would come down to get in their cars would look at the whole spectacle and their faces were just filled with a mix of intrigue, confusion, and a little bit of amusement at the whole thing. That was so funny to watch.

I know, it was funny because like nobody really knew what was going to happen and we had just been talking before, like “We’re just going to make it work, whatever happens, happens. If a car pulls in just walk around it, pretend it’s not there.” So that element of the unknown and spontaneity was kind of cool. 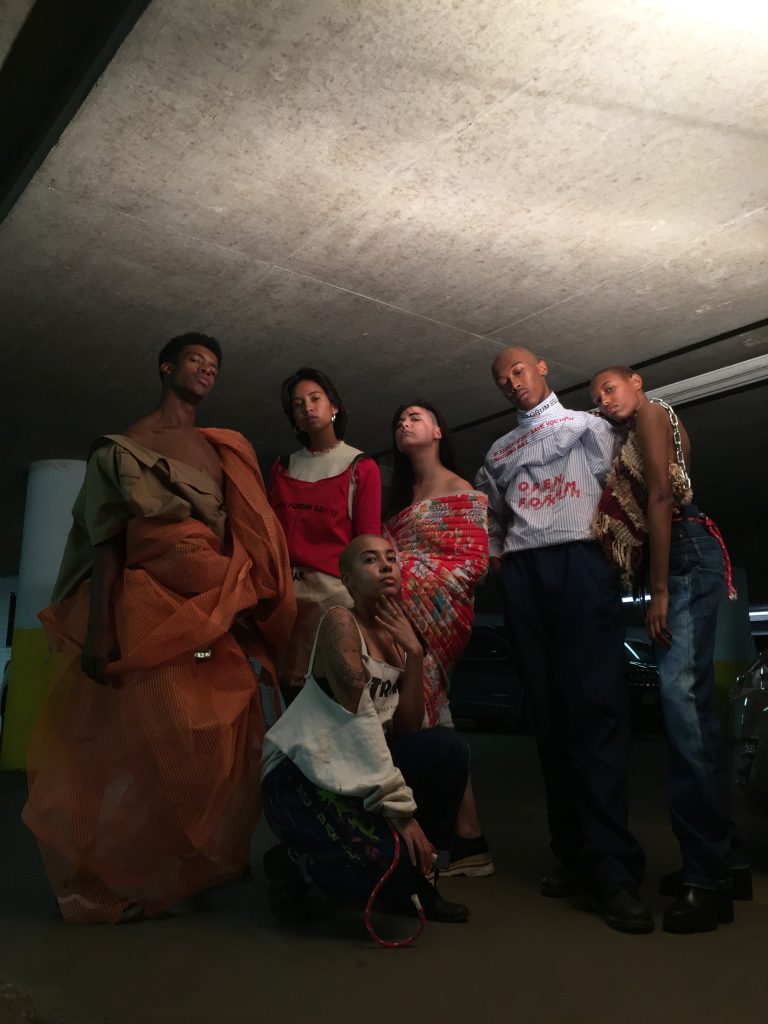