Artist of the Week: Meredith Argenzio 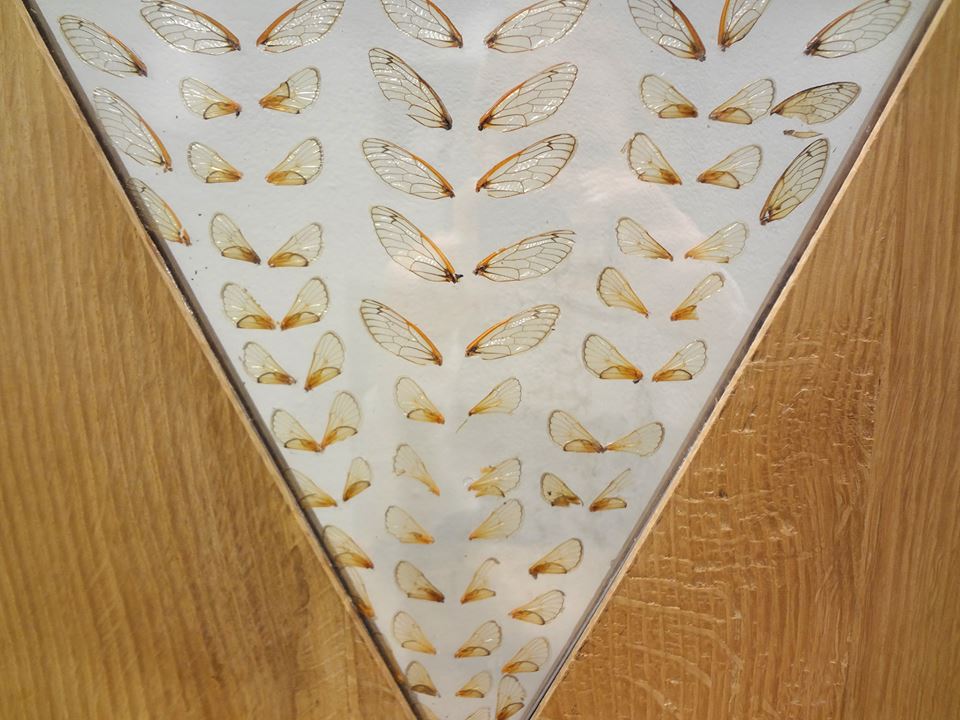 Ink Magazine (IM): So from the very beginning can you kind of tell me a little bit about your start, like where you began finding an interest an art, from then all the way to your applying to VCU?

Meredith Argenzio (MA): Okay. Well I’ve been doing it and had a lot of interest in it since childhood, and I had a specialty class in middle school, and then I went to a specialty center for art during high school… Back in high school I did a lot of paper cutting and 2D stuff. And… I only applied to two colleges, including VCU, because of money, and it seemed silly to go anywhere else, since VCU is so good and I could get in-state tuition. I was waitlisted at the other college and eventually didn’t get in, but I was happy I went to VCU because, well, I originally started in the Communication Arts department and that’s when I kind of realized my heart sort of lived more in the built world. Furniture, object design, interior design, and architecture.

IM: And what was it exactly about design that made you want to switch majors to Interior Design, then? 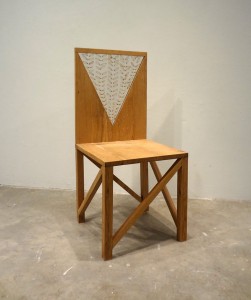 MA: I went into Communication Arts almost as a reaction to AFO, because I while I loved it in a lot of ways, I also found it really frustrating because I always made work that was really tedious and difficult, and had all this effort in it. I got frustrated… I guess because I felt I wanted to be challenged more. Comm. Arts seemed like the most challenging major… and then I got into Comm. Arts, and it was amazing … but my passion didn’t lie there. It felt like I was doing all this work but didn’t feel any real passion for being an illustrator or doing graphic things. And then I did research into industrial design, and in order to do that, you need a background in architecture, or interior design. I had a lot of friends in interior design and it just seemed to make a lot of sense. I think I originally avoided it because I had so many friends in it… I thought, “Oh it’s their thing, not mine.”

IM: Right. So you’re in the Interior Design department, but you’re also a Crafts minor. When did you decide on that?

MA: Well I was actually a Crafts minor while I was still in Communication Arts. So it was always something I knew I wanted to do, and then I took beginning-level Wood, and I fell in love with it, it was super challenging. But I loved the department and the atmosphere, and it was just so immediate, because in interior design you do all this work but it’s still kind of representational. In craft, it’s like, in your hands, and it goes from being these raw pieces of wonky lumber to a refined, useful object. So I guess I was doing craft work from day one, regardless.

IM: What things or people inspire you work in Craft?

MA: I would say… my work is kind of inspired by my relationships with women, both via my sexuality, with myself as a woman, with my mother… there’s a lot of feminine imagery and symbols, and using them in a way that’s actually very dark and frustrating for me. And I don’t even know if that reads for a lot of people, but a lot of the flowers trapped in between layers of glass, for example, are not just flowers that I bought but have been collected over periods of years… some of them are from trips, some are from lovers. A lot of the bugs I use in my work as well were actually collected by my mother from the farm she lived on. This chair I made with cicada wings she actually collected for me over a summer, and I had to saw the wings off myself, so it was like this really kind of disgusting, visceral process of holding a dead body and sawing off its wings as delicately as possible. A lot of the things from her come back to me examining my relationship with her through my work. It all comes back to this sort of layers of emotions, and attempting to “trap and freeze” feelings or moments in time so I can kind of examine them.

IM: So I’ve also noticed a lot of your furniture work is a combination of the natural elements, like bug wings or flowers, incorporated with glass, and simple basic sorts of forms. What inspiration drives that?

MA: Well, my favorite is Kura Mata. He did this famous chair based off of A Streetcar Named Desire, which is a cast plastic chair with all these roses in it. I found that really inspiring, and I kind of try to draw from a really minimalist architecture, I like the simplicity of it, with the unpredictable intricacy of natural elements. And stenciling used to really be my thing, I always played with light, and translucency, so I try to bring that into my woodwork. I think adding moments of cutouts and windows to a heavy material like wood is important. 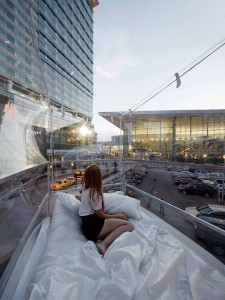 The Hotel Rehearsal, (With Alex Schweder)

IM: What are some themes and motifs from your past work that are sort of developed or recurring, and what sort of things are you exploring now and in the future?

MA: I used to focus a lot on scrap wood and recycled wood. I also used to… I guess just make choices that were more aesthetic, whereas now I kind of try to focus more on structure. The first thing I made was this really bright color and it could barely hold my weight, and now my newest ones are like, solid oak, and can hold pretty much anybody, I tried to really incorporate the structure into the design itself. So now that I’m better with structure, I try to really incorporate that, and joinery of the material as a driver as well.

IM: Now can you tell me a little bit about the Hotel Rehearsal Project you did?

MA: Hotel Rehearsal is this project I did summer 2013 with architect and artist Alex Schweder, and he was trained as an architect, went to Princeton and is currently going to Cambridge for his doctorate. He kinda jumped into fine arts and now he operates in both. I met him at Qatar when I was there for two weeks last year, and I saw him speak and I really loved his work, so I ended up having lunch with him. I asked him about his design experiences and schools he went to, and at the end of our conversation I tried to further interaction by seeing if he was doing any projects. He said he was doing one in Denver the following summer and he needed some assistance. So from March to July we kept our collaboration up digitally through emails and scanning, and had me doing concept drawings and research. Then we spent an entire month in Denver on this project. It combines a symbol of suburbia, which is the automobile operating on the horizontal plane, and the elevator, which is an urban symbol operating on a vertical plane. So the whole idea is you drive around to parking spaces in this white van, and you press a button for these hydraulic feet to stabilize the weight. Then you enter in the back and inflate the “hotel room”, perched on a scissor lift in the back. You get in and you can raise it up to three stories, and combining the views and the location, you’re practicing where a hotel room could be. Its about re-imagining space, as a reaction to the amount of parking lots of Denver which are kind of an urban eyesore.

IM: And I know you both got some publicity for this project you did, can you talk about that?

MA: Mhm, well the Today Show did a segment on us, we were on CBS Denver, and we kind of became a viral internet thing. But some of it was made by our hotel sponsor and grew from there. It was kind of funny to see the mainstream media drive the project as a “50,000 dollar hotel room” sort of like some sort of gimmick, “Oh, it’s so expensive!” When we’d really worked so hard on it, and the price to rent it out to the public was something we had nothing to do with. But the response from the architecture and art world was great because it’s a pretty considered piece about urbanism.

IM: I think it sounds incredible. But now… in terms of future projects, what’s a direction you’d like to go in with your work? 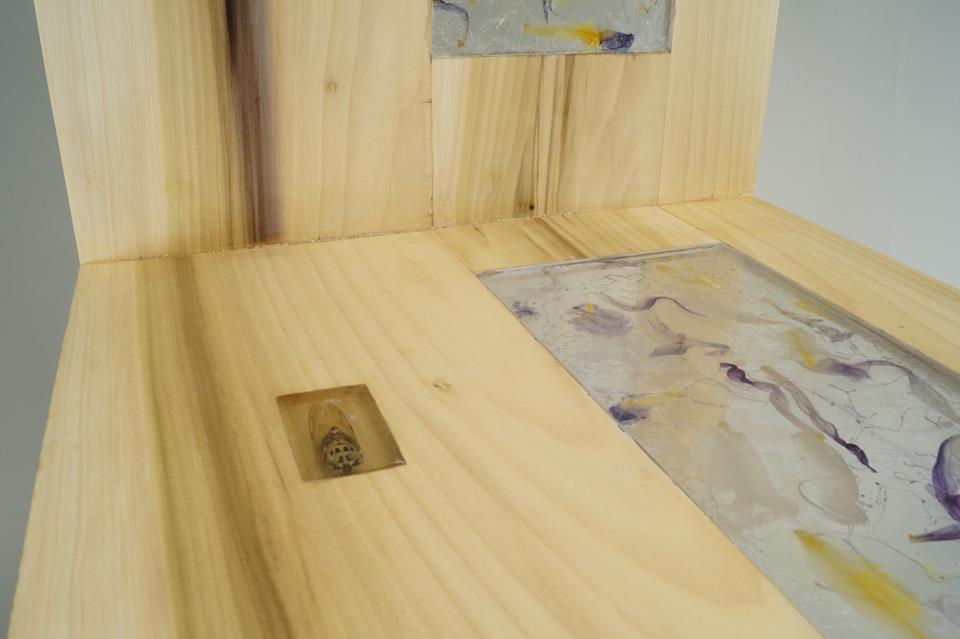 MA: Well I’m in a sculpture class right now called Hybrid Forms, because I really wanted freedom to apply my craft and design abilities to make something that I wanted to build. So right now I’m working on two projects, one at furniture scale and something at an interior scale, to utilize the interior in an architectural way and my building skills because of course I’ll have to build these things… But to make spaces that don’t have any strict program or aren’t solving any problem, but more subtle, succinct ideas that originated from myself. So it’s almost like taking principles I learned working with Alex and putting my own twist on that for my own set of needs. And I want to use my experience in interior design as a factor, because in our field it’s all about accessibility and the product as it will be used by the end user, and that’s really important to me. I’m also going to New York in a week to help Alex with another project. I don’t know the name yet, but it will be showing during the Armory Show.

IM: So lastly, what do you want your work to make your viewers feel?

MA: I guess speaking on the crafts and sculpture work I have now, because those are more so my own. I want to make people… question themselves, but I also want to challenge them to notice the small details in all the emotional weight that can be expressed by a really subtle gesture from a more soft language. And like I mentioned before, a lot of my work has to do with my relationships with important females in my life, so I kinda want to make work that sort of… champions new perspectives in sexuality and identity. It isn’t queer art, it’s just art that’s inherently queer. So I guess to rephrase a better answer, I think my goal is to make people question their definitions of identity and expression with my future art.