Concert-goers understand the importance of crowd participation during sets. A somewhat boring artist could have an incredible performance with the proper amount of crowd interaction infused into it. However, this isn’t the case for Marc “Loop Daddy” Rebillet. It’s 1:52 in the morning, and I just got back from seeing Marc Rebillet at the renowned 9:30 Club in DC. Before going to the show, I remember seeing Marc’s videos advertised on my Instagram feed, almost emoting some sense of meme energy. With only a looper, a keyboard, a stripped-down percussion setup and his own mind and vocals, Marc’s videos quickly became a viral sensation, displaying his both incredible, on the fly musical talent, and excellent sense of humor. With videos such as “REACH OUT” and “SUMMERTIME”, Marc seems to rift against his own persona, playing off of comedic bits and storylines that develop as he creates a musical world around them. Often in nothing more than a robe or his underwear, Marc can be seen in hotel rooms swinging his head in circles, shouting what to some may seem like nonsense, but to others is a relatable and simple take on what it means to make music.

Having seen his videos popping up all over the Internet during the past several months, and with a tour date headed to my hometown of Washington, D.C., I decided to buy a ticket and experience the potential magic of this viral sensation for myself. Immediately as the show began, Marc’s personality filled the room as he pumped up the crowd like a wrestler entering the ring. His character was something that I felt I could digest and take with a serious curiosity and questioning, while still being able to laugh along with it. Kicking off the show with an intense dance instrumental accompanied by his rantings of “being a little baby,” the crowd was simultaneously entranced and pushed to move by his music, while also being laughably joyous at the bizarre and absurd, comedic stunts that Marc created for himself.

What interested me most about the performance was not only Marc’s obvious musical talent, ear for rhythm, and tight performance techniques, but the incredible personal touch that was left on the audience. According to Marc, every show is different, because every show is improvised, and altered in the moment depending on the crowd and the way he is feeling, which made for wild and drastic genre changes, bizarre interludes, and heart to heart moments with audience members. At one point, Marc facetimed his mom with the crowd after receiving a good luck text from her. At another point, Marc played a voice memo sent to him by internet-based music reviewer, Anthony Fantano, who was encouraging Rebillet to quit his Juul addiction. Moments like these allowed the crowd into Marc’s space, not only as an artist and viral sensation, but as a normal guy.

With a growing cult following and videos racking up millions of views on his YouTube channel, Marc Rebillet forced me into an impression of him by his musical schtick, while also leaving me feeling like I could hang out with him after the show. Even the crowd itself seemed to feel a sense of connection and trust, all surrounding the sheer charisma of Rebillet. In one moment, Marc asked the crowd to pass a tip jar throughout the venue. While being lost for a little while in the middle of his set, the tip jar, now entirely filled with money, eventually made it back to him. Often randomly being given objects and topics by audience members, Rebillet would create full songs around them, which to me seemed to give audience members a sense of purpose in coming to the show. I found myself sitting in my Uber back home, thinking of things I could bring with me to my next show of his, simply because I felt like the chances of him interacting with them would be high. Finally, wrapping up his performance with renditions of several of his viral hits, Rebillet high fived fans, thanked the crowd, and left the stage, leaving the audience with, in my opinion, a concert experience they would never forget. Musicians must remember that personal connection is the key to success. Artists with little musical talent can often maneuver their way into the limelight based simply off of their charisma. Combine this outrageous charisma with unbelievable talent, and you get Marc Rebillet. 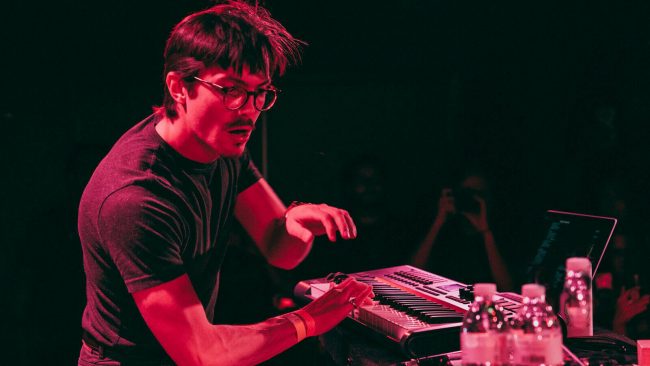 I claim no ownership of this image*