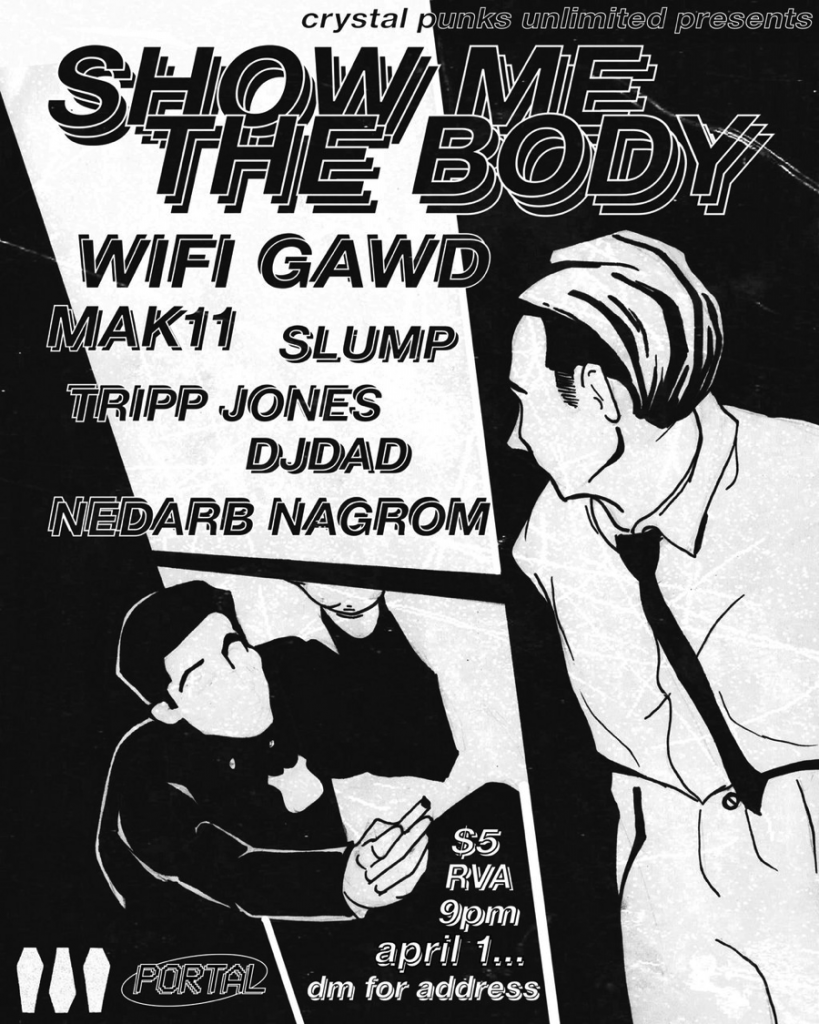 On a warm April Fools night I found myself at a Crystal Punks Unlimited house show hosted within walking distance from VCU’s campus at Shaheed’s house a.k.a Ma and Pa’s. At the back entrance was a six-foot solid metal gate tagged with graffiti where Ed Colmenares was collecting the $5 cover charge. It was a donation-based party and all the proceeds went to the musicians. Upon entering we met up with Shaheed themself who was wearing their signature overalls while successfully organizing the chaos of having over 100 kids at their home. I found myself in the four-car driveway filled to the brim with quirky art school kids and the smell of smoke and beer in the open air. In the driveway there was a van with three kids smoking in the enclosed trunk. I soon found out that it was the tour van of the evening’s headliner band: Show Me the Body. I hung out with the three members on their van before the show. They came down from NYC, the hometown of the bassist, Harlan Steed and lead singer, Julian Cashwan Pratt who grew up together. Their drummer, Noah Cohen-Corbett, who’s from Massachusetts mentioned that they had just arrived from D.C. where they performed the night before for an audience of which two thirds was tripping. The band went on tour across the U.S. this past winter. They plan to make it all the way to south Florida in the near future.

Before we knew it Wifi Gawd was performing so we headed to the living room. Washington, D.C. rapper Wifi Gawd was getting the crowd pumped and ready to go. The rappers in the community are all about collaboration and coming together to put on shows for the underground music scene. Wifi Gawd belongs to the Portal Boyz Collective. The performance was an amazing production of rhythmic hyped sounds and vocally spitting fire. Wifi Gawd played their songs while rapping over it and adding adlibs causing the crowd to mosh and jump up and down. The room became musky with thick, hot air so many people took a breather outside in-between sets.

Next up was Show Me the Body and by then the household became completely packed with over 100 people. Their sound is a delightful mixture of noise, hardcore, punk, blues, and hip hop funk. The band’s front man Julian performed on a banjo going between swiftly delivering hip-hop/funk styled lyrics and hard-core screaming. He performed with so much gut. He dived headfirst into the audience where he continued to sing while laying on the ground. Their amazing bassist, Harlan, records sounds from previous practices and plays them at their live shows while the band is performing giving them a post-punk noise vibe. Their show was so upbeat the house became one big mosh pit of head bangers. It was dirty as fuck y’all, in a good way. There were people dancing and crowd surfing in the living room. The band ended the show with their song Body War.

Body War by Show Me the Body:

As soon as the song ended the house was cleared out due to the cops responding to a noise complaint. Show Me the Body stuck around after the show to hang out with the few people that stayed. Show Me the Body are the type of people you can smoke a joint with and openly talk about your opinions and hopes for mankind. They are good people creating a community that’s motivating and inspiring change in each other. There were so many good vibes exchanged that night that people even stayed after to clean the yard cluttered with hundreds of empty beer cans and cups. The band took off for Baltimore at 2 a.m. that same night. It was a successful night out in the Richmond house show community. Sounds were heard, good vibes were spread, and it was lit.